Nutraingredients-Asia once again reports what it seems a South Korean orchestrated tendency to blend krill oil with non-krill material.

Such sellers do no only mislead consumers with faulty nutritional messages, but also put at risk consumers’ health. Households not only trust that their krill oil will release all its nutritional power, but also it is a clean product.

Four out of 26 checked oil brands were not pure krill oil. All coming from very prominent South Korean contract manufacturers. All 4 used krill oil as a raw-material coming from respected brands.

Nobody is inmune in this fiasco.

As recently informed by Tharos, the South Korean Ministry of Food and Drug Safety (MFDS) recently recalled several brands caught using banned solvents in the krill oil extraction, among other faults. Read here the previous recall details, and here the brands involved at that time.

We are not sure if the same South Korean seller repeats itself. A simple change of brands would allow them to keep moving on. Neither there is information about the manufacturer of the krill oils used on such brands. Here is the list of krill oil providers in South Korea, from one or more of them comes the oil. 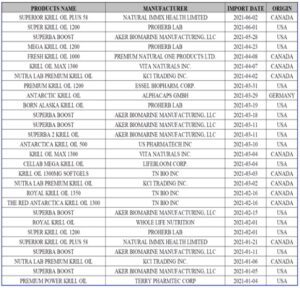 Needless to say the gratitude we must all have with the South Korean Ministry of Food and Drug Safety (MFDS) for running these controls. Would you like to read the news from its source, visit MFSD’s site here. Also many thanks to the Korean Consumer Agency (KCA.)