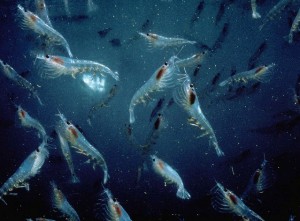 The Southern Ocean contains the largest underexploited fishery in the world – the krill fishery. While little known, this might become a source of conflict between conservationists and the fishing industry, in which case we’ll have to decide what Australia’s role in managing this resource should be.

Periodically, a journalist discovers that there’s a fishery for krill in the waters around Antarctica and a shocked report appears questioning how we could allow harvesting of these ‘tiny shrimplike creatures’ that form the ‘base of the Antarctic food chain’. They point out that this fishery is taking the food from the mouths of the whales and beaks of penguins and is probably doing untold damage to this ‘pristine ecosystem’. These reports then drum up support from a range of conservation interests and uninformed scientists who decry this destructive practice.

So, what’s krill, how come there is a fishery and why should Australians care?

Antarctic Krill reach a length of 60mm so they’re not strictly tiny but they are important. They occur in vast swarms stretching for tens of kilometres and are central to the Antarctic food chain, eating the microscopic plants and animals and in turn eaten by most of the larger animals. Antarctic krill is attractive to a fishery because it’s large, easy to catch and hugely abundant. There are estimated to be 120–600 million tonnes of krill, making them amongst the most abundant animal species on the planet. The krill fishery began in the 1970s and catches peaked in the early 1980s, with Japanese and Soviet vessels catching half a million tonnes a year. Today about 200,000 tonnes are caught, largely by Norwegian vessels, and are used to produce high-end aquaculture feed and krill oil supplements for human health. It’s proved very difficult to make a marketable product from krill and it’s extremely expensive to go fishing, so the fishery has always been held in check by economic forces.

When the krill fishery began there was considerable concern that the overharvesting of whales and seals in the Southern Ocean would be repeated for krill with disastrous ecological consequences. Australia was instrumental in the rapid negotiation of a comprehensive convention designed to manage the krill fishery—the Convention on the Conservation of Antarctic Marine Living Resources (CCAMLR). The aim of CCAMLR was to ensure that the fishery was sustainable and that its management also took the needs of the other animals in the ecosystem into account. Because of the central ecological role of krill, the Convention necessarily took an approach that encompassed the whole of the ecosystem.

CCAMLR, which established an international secretariat in Hobart in 1981, set the scene for the development of concepts such as ecologically sustainable development (ESD) and the precautionary approach to fisheries management. It was hailed as a ground-breaking approach to resource management when it was signed in 1980 and it still is a remarkable conservation document. CCAMLR has since overseen the management of the krill fishery and a range of Conservation Measures now regulate the fishery, resulting in a regime that would be considered comprehensive and innovative in any other environment. But the Antarctic is a special place and, unlike anywhere else on the planet, there’s an international focus on conservation.

Currently the fishery takes only 0.3% of the estimated krill biomass and 0.4% of that needed by seals, seabirds and whales. Even if the fishery expanded to the current limit (5.6 million tonnes a year—an unlikely scenario) it would be harvesting less than 10% of the stock. There are few other fisheries in the world where the allowable catch is set at such a low proportion of the biomass and where the actual catch is so much lower than that allowed, but there are still rumblings about whether CCAMLR’s management is precautionary enough.

The precautionary management regime still allows for a large tonnage to be harvested—should the fishery ever be fully exploited. This is because krill is a hugely abundant animal. These large numbers tend to alarm people who question the continued existence of such a fishery and the way in which it’s managed. Repeated unfounded criticism of CCAMLR’s approach will undermine the effectiveness of the only comprehensive treaty which ensures the conservation of the marine environment around Antarctica. Australia has been a major player in CCAMLR since its establishment and has taken a lead in research to ensure that the management of the krill fishery is based on sound scientific knowledge—despite an absence of any domestic economic interest in krill. The Government has re-stated its commitment to the conservation of the Antarctic ecosystem, and so must continue to engage in CCAMLR, scientifically and diplomatically. Without CCAMLR there would be no Antarctic conservation.

So, will the krill fishery ever gain universal acceptance? Probably not. Will it remain sustainable? If CCAMLR remains true to its objectives then it should. Will Australia maintain its interest in Antarctic conservation? Hopefully yes, because engagement in CCAMLR—the most active wing of the Antarctic Treaty System—makes good political sense and hopefully provides the best hope for a healthy Antarctic ecosystem.

Stephen Nicol is an adjunct professor at the Institute for Marine and Antarctic Studies and an honorary fellow at the Antarctic Climate and Ecosystems Cooperative Research Centre, University of Tasmania. Image courtesy of Flickr user Norkrill.