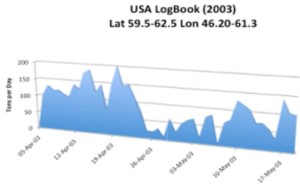 Season 2008-2009 low catch result (South Antarctic krill, Euphausia superba) is not necessarily a confirmed trend of a coming regular and stable low-catch scenario that it is in direct relatio n to either environmental or over-catch conditions. There are indeed environmental issues effecting krill catch; higher sea-temp and with it salps and algae-conditions which affe ct krill feeding patterns. On the opposite, there is (still) no direct relation to over-capture operations as the actual catch limit imposed by CCAMLR (areas 48 & 58) of around si x (6) million tons per year, and the corresponding precautionary level imposed also by CCAMLR of 625.000 tons are still far from being accomplished by the actual fishing fleet (see “Tharos Krill Industry Report”). We cannot confirm with certainty that such environmental conditions are not a new and damaging trend, although it does not yet directly relates to Tharos’ 20-year work on this area. We have seen a cyclical (approximate) 6-8 year pattern where low-catch levels are achieved. On such seasons, changes occur on capture data within the same season. Capture pattern reflect such cycles on seasons 1987/1988, 1995/1996, 2001/2002, 2008/2009. There is the need for a much longer statistical analysis to confirm this although Tharos’ preliminary data indicates that krill capture might regain better figures towards mid 2010-season, or even early 2011 for a new high-capture growing curve.