Their focus being primarily food-grade dried krill meals, are used inland (in China) to solvent-extract krill oils mainly for the internal market which still shows a healthy 2-digit CAGR since early 2010s.

The question is if the published plan to increase the Chinese krill fishing effort 60 times can be achieved (vs. current 32 000 tons), commercially and technically.

Although there is a strong push by more educated Chinese consumers for novel foods, the ones perceived as healthy as krill oils, we are of the opinion that China will not achieve such growth in fishing neither overtake western-made krill oils as main demanded brands, at least for the coming 3 to 4 years.

Beyond krill oil (and other krill products) demand pressure, behind the Chinese Government support to its krill fishing operators, there is also a geo-political decision for this effort. Southern Seas are “there to be conquered” as one operator told Tharos…literally we should add.

The Chinese Government support is not new. It goes back to the 90s and 2000s when the “863 Plan” was designed. What is the “863” plan? It is the Chinese first Antarctic Ocean Living Resources’ Development and Utilization Project launched in Dalian, March 16th 2011, named “Rapid Separation of Antarctic Krill and Key Technology of Deep Processing” targeting mainly oils, food-grade meats and dried meals.

This project started in October 2010 when the Chinese State Ministry of Science officially launched the “863 Program” to become a “national strategy”. In December 2010 a project team was put together counting nine universities and research institutions. In March 2011 the project was formally approved.

Said that, Chinese operators rushed to enter the Antarctic krill fishery having currently 4 corporations working in the area. Although China regularly register several trawlers for the krill fishery every season (9 trawlers were registered in one past season), it finally makes it with few of them only. Somehow they dilute their fishing effort for technical, and commercial reasons.  We do not see this trend to dramatically change in the near term.

Having at present only one new factory trawler in the drawing table, the remaining trawlers, suitable for the krill fishery, are either being refitted, or just sent to work as they are, not always on the best working condition.

Chinese crew members are hard workers, but somehow the compliance of technical guidance on how to reach the best out of the onboard equipment is not always followed. All this have implications in the final product, which for some Chinese consumers explain why they remain advocates of foreign brands.

And we have fishing restrictions designed and enforced by CCAMLR that will prevent a fishing effort growth of such magnitude, being world known that the Antarctic krill fishery is probably the best and most strictly managed fishery, and its known “precautionary limit“.

Since the beginning of the commercial krill fishing (70s) the precautionary limit has never been reached. Current South Antarctic krill fishing level is 28 to 35% of CCAMLR’s precautionary limit (region 48 = 625 000 tons), and around 2 – 2,5% of the annual Total Allowable Catch (TAC).  What has been reached is fishing levels that have gone above the TAC on specific micro-zones or MPA’s (marine protected areas), where CCAMLR stopped krill commercial fishing activity.  These areas are small sub-regions within a larger region.

Although CCAMLR has granted krill fishing notifications in almost 100% of the time they have been requested, we doubt it will do envisioning such a substantial growth effort.

The Chinese krill fishing fleet has not yet overtaken western catch effort; 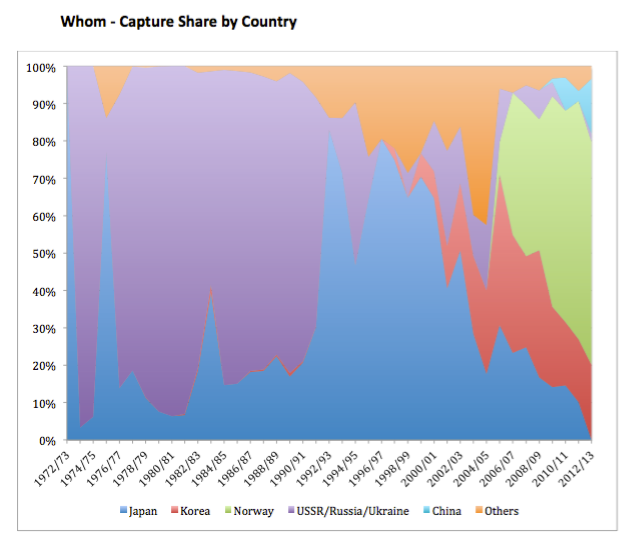 Although Chinese-made krill oils appear as recently coming live to the market, these are present since mid/late 2000s when the first Government-backed krill oils where manufactured in the Shangdong Province. Since then, several progresses and setbacks have followed their nascent industry, in a time where commercial barriers were built to protect such industry.

It is not necessarily the “arsenic matter that matters“, but also how this issue is addressed and enforced for local-made krill oils, as discussed by one Chinese distributor with Tharos.

As no Chinese krill oil manufacturer is currently vertically integrated, it adds some complexities to their value chain.

Summarizing the current state of affairs, in China and worldwide:

Tharos has reported on the krill industry in China. For more details please visit our Reports section.