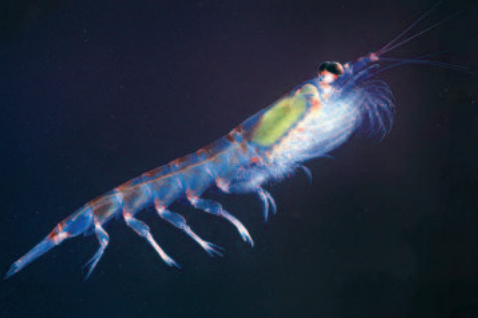 This is a 2008 Research publication from the Alfred Wegener Institute for Polar and Marine Research in Bremerhaven, Germany, written in 2008. It is today’s valid question when a growing interest in the South Antarctic krill fishery might have an impact on the fishery productivity and related species that fed on krill.

Opposite to what was expected after the near extinction of the stocks of great whales around Antarctica in mid-1960s (when 20,000 great whales were being converted every year into soap, candles and dog food), krill stocks have declined by about 80% over the past three decades, accompanied by an increase in salp biomass.

Professor Victor Smetacek is proposing an hypothesis based on evolutionary ecology where the “food chain of the giants” (diatoms-krill-whales) was maintained thanks to environmental conditioning by the same giants, whereby the limiting element iron was recycled in the surface layer for longer periods of time by the feeding activity of the whales than in their absence.

Since the whales were eating protein but accumulating lipids, they were sequestering energy and could well have been recycling essential elements, specifically iron, back to the ecosystem for phytoplankton to fix more energy. Such a “manuring mechanism” by the giants would have increased the spatial extent of the productive region. In their absence, productivity based on recycled iron has gone down, the productive area has shrunk and salps have moved in.

Additionally, estimating the stock size of krill is a challenge, because it occurs across a broad range of distribution patterns; from tight schools with a very high density of individuals to a few individuals scattered over large areas. Further, it can hide under ice cover over a significant portion of the year, and krill densities under summer sea ice cover are not known. Krill stock size estimated from net catches and acoustic surveys and extrapolated over the known krill areas range between 80 and 1,000 million tons (Everson et al. 1990; Nicol et al. 2000).

Full report can be read at ARE DECLINING ANTARCTIC KRILL STOCKS A RESULT OF GLOBAL WARMING OR OF THE DECIMATION OF THE WHALES?